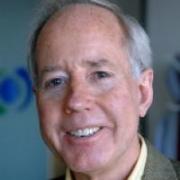 Dr. Prinn's research interests incorporate the chemistry, dynamics, and physics of the atmospheres of the Earth and other planets, and the chemical evolution of atmospheres. He has been a faculty member at MIT since 1971, and headed the MIT Department of Earth, Atmospheric and Planetary Sciences from 1998 to 2003. He is currently involved in a wide range of projects in atmospheric chemistry and biogeochemistry, climate science, and integrated assessment of science and policy regarding climate change. He leads the Advanced Global Atmospheric Gases Experiment (AGAGE), in which the rates of change of the concentrations of the trace gases involved in the greenhouse effect and ozone depletion have been measured continuously over the globe for the past three decades. He is pioneering the use of inverse methods, which use such measurements and three-dimensional models to determine trace gas emissions and understand atmospheric chemical processes, especially those processes involving the oxidation capacity of the atmosphere. He is also working extensively with social scientists to link the science, economics and policy aspects of global change. He has co-led the development of a unique integrated global system model coupling economics, climate physics and chemistry, and land and ocean ecosystems, which is used to estimate uncertainty in climate predictions and analyze proposed climate policies.

Prinn, R.G., Complexities in the Climate System and Uncertainties in Forecasts, in: The State of the Planet: Frontiers and challenges in Geophysics, S. Sparks and C. Hawksworth (editors), Geophysical Monographs, 150, AGU, pgs. 297-305, 2004